Brussels: A top EU official has said that Brussels is concerned about recent layoffs at Twitter and gaps in the social network's content moderation practices.
"The recent layoffs @Twitter and today's results of the Code of Conduct against #Hate Speech are a source of concern. In my meeting at Twitter's HQ, I underlined that we expect Twitter to deliver on their voluntary commitments and comply with EU rules, including #GDPR & #DSA," EU Commissioner for Justice Didier Reynders tweeted . In a subsequent tweet, the commissioner urged IT companies "to look at their content moderation practices and address the gaps shortly." "It is disappointing that most of IT companies taking part in EU Code of Conduct have slowed down their responses to notifications of #Online Hate Speech," he said. 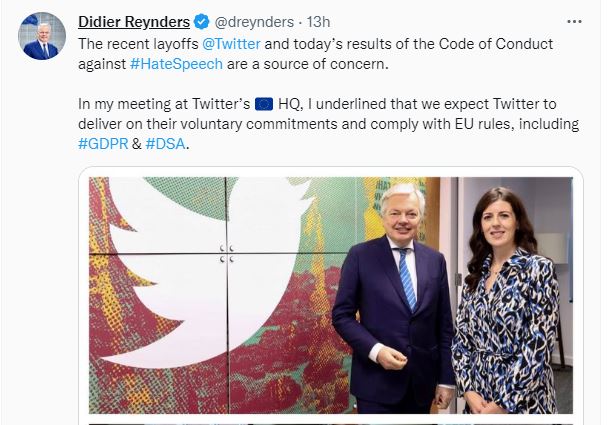 On Thursday, the European Commission released the results of its evaluation of the Code of Conduct on countering illegal hate speech online. The EU data showed a significant decrease in companies' notice-and-action results in 2022.
The 27-member bloc said companies reviewed 64.4 per cent of notifications within 24 hours, which shows a decrease as compared to the last two monitoring exercises: 81 per cent in 2021 and 90.4 per cent in 2020.
"The removal rate was 63.6per cent, similar to 2021 (62.5per cent), but still lower than in 2020 (71per cent). YouTube improved its removal rate in 2022 (90.4per cent), as compared to 2021 (58.8per cent). All the other IT companies removed less content than in 2021, in some cases with minor variations (Facebook removed 69.1per cent in 2022 and 70.2per cent in 2021; Twitter removed 45.4per cent and 49.8per cent, respectively)," the European Commission said.
Earlier, media reports said that Twitter has closed its entire Brussels office, prompting concerns among European officials about whether Twitter will abide by the EU's rules on content moderation.
Last month, the world's richest man finalized the acquisition of Twitter, which cost him USD 44 billion. Following the takeover, Musk changed the company operations, including the termination of Twitter's executives who were responsible for the platform's privacy and cybersecurity, and thousands of regular Twitter employees.
The significant policy changes have caused concern among US lawmakers. Earlier today, Musk said that the social media will reinstate blocked accounts next week after a majority of users voted for "general amnesty."
This follows Musk's decision to restore the account of former US president, Donald Trump and American rap artist Ye, formerly known as Kanye West. (ANI)