Mumbai (Maharashtra): Bringing together once again the world’s finest films and their stellar creators under one umbrella, the 53rd edition of the International Film Festival of India kicked off with a grand opening ceremony at Dr Shyama Prasad Mukherjee Indoor Stadium, in Panaji, Goa today, and 20 November 2022. Conducted jointly by the National Film Development Corporation and Entertainment Society of Goa, this edition of the film fiesta is showcasing a collection of 280 films from 79 countries. 25 features and 20 non-feature films will be showcased in the Indian Panorama section from a broad spectrum of entries. 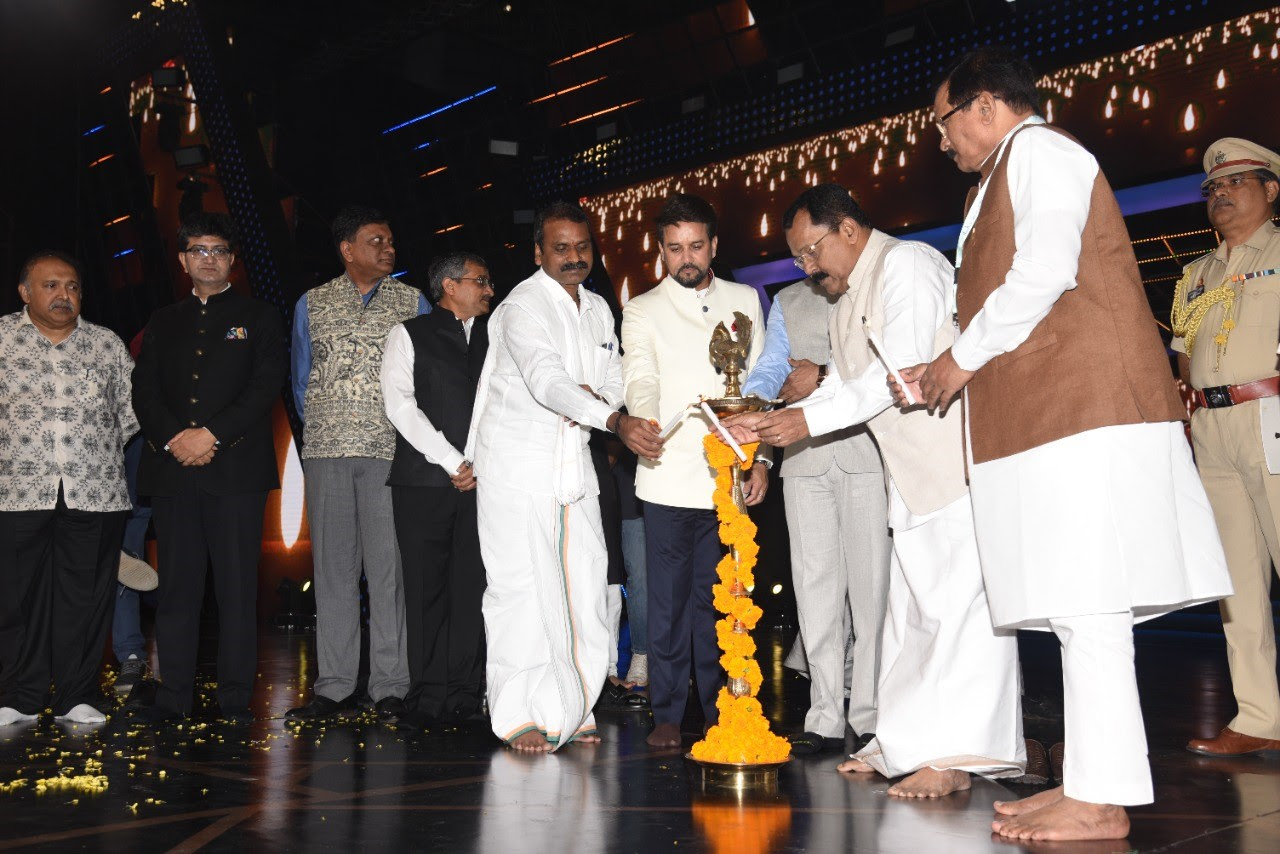 Kindling the auspicious lamp for the nine-day-long avalanche of film excellence, Anurag Thakur, Union Minister for Information & Broadcasting and Youth Affairs & Sports, said that his vision is to make India the most sought-after destination for film shoots and post-production backed by the talent of our people and innovation of our industry leaders. “My vision for IFFI is not limited to one event, but what IFFI should be when India celebrates its 100th year of Independence once we transition from Amrit Mahotsav to Amrit Kaal! We aim to make India a powerhouse of content creation, especially regional cinema by scaling up regional festivals,” he elaborated.

Shri Thakur said that 53rd IFFI is all set to be a melting pot of myriad vibrant cultures and a spectacle of cinematic excellence. “IFFI presents unique opportunities and incredible possibilities for young and established filmmakers to network, pitch, collaborate and experience the best from the world of cinema. Cinema captures and chisels the conflux of a country's rich culture, legacy, heritage, hopes and dreams, aspirations, ambitions and most importantly the collective conscience of its people at any given time in history”, he added.

Tracing back the memory lane of Asia’s oldest film festival, Anurag Thakur said that the concept of IFFI is rooted in its theme of ‘Vasudeva Kutumbakam’, which embodies the essence of peaceful co-existence where the world is one family.  “India’s rising global role and Presidency of the G20 revolves around this theme of the ‘One Earth, One Family, One Future’ under the able leadership of Prime Minister Shri Narendra Modi”, he added. 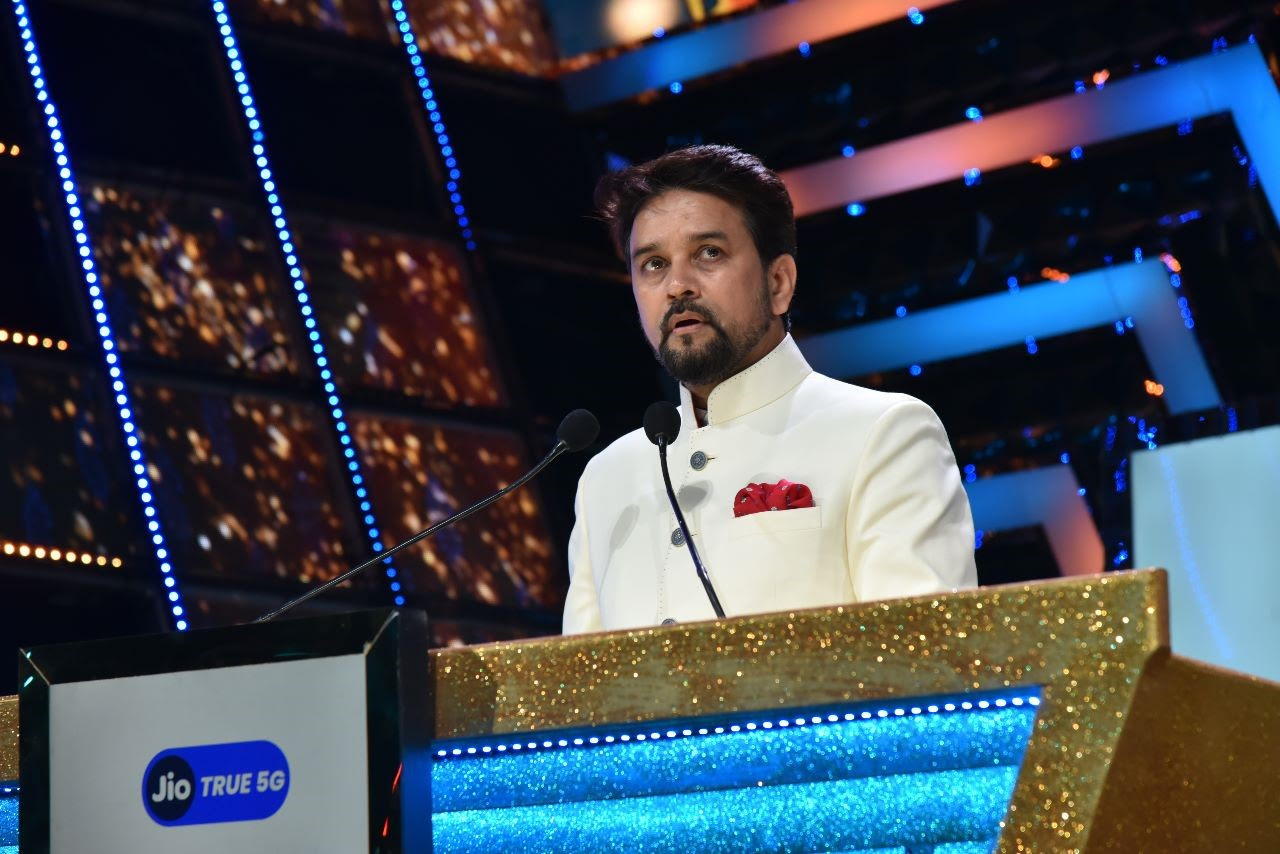 “For the first time gala premieres of Indian, global cinema, and OTTs will be held at IFFI, including the premiere of the fourth season of the globally acclaimed series Fauda, which features some of the biggest Israeli stars in the world today. I would also like to share that the next season of this show will also be launched at IFFI”, the Minister said.

Country of Focus to honour our steadfast relationship with France

Highlighting the Country of Focus session at IFFI, the Minister said this year marks 75 years of India - France relationship, marked by a meeting between the leaders of the two nations- Prime Minister Narendra Modi, and President Emmanuel Macron, and India was the Country of Honour at Festival De Cannes this year. “Continuing the spirit of India’s ‘Country of Honour’ at Marche De Films at the 75th Cannes Film Festival, I am delighted to welcome France as the ‘Country of Focus’ at the 53rd edition of IFFI,” Thakur said.

The second edition of ‘75 Creative Minds of Tomorrow’

Union I& B Minister also informed the audience that in its second edition, ‘75 Creative Minds of Tomorrow’ have been selected after a rigorous process - by an eminent jury comprising of a Lifetime Awardee, NFA, Grammy and Oscar winners - from nearly 1000 entries across 10 categories such as Direction, Editing, Playback Singing, Script Writing, Animation and Acting amongst others. “They represent 19 states, coming from places such as Jaintia Hills (Meghalaya), Lakhimpur (Assam), Khorda (Odissa) and the youngest amongst them is 18 years old!”, the Minister added.

The Minister congratulated celebrated Spanish filmmaker Carlos Saura for winning the Satyajit Ray Lifetime Achievement Award this year. The Minister also announced that the Indian Film Personality of the Year Award will be conferred to South Indian actor Chiranjeevi. Thakur also said that this edition of IFFI will commemorate 50 years of Manipuri Cinema by showcasing a specially curated package of notable feature and non-feature Manipuri films.

Shri Anurag Thakur also pinpointed the importance of the Film Bazaar which is being arranged on the sidelines of IFFI. “For the first time, IFFI has augmented the scope of Film Bazaar by introducing Country Pavilions. I invite you to explore over 40 Pavilions that will be showcased at the 15th edition of Film Bazaar. And for the first time, IFFI will have a Technology Hub to showcase the latest innovations from the cinema world”, the Minister pointed out. 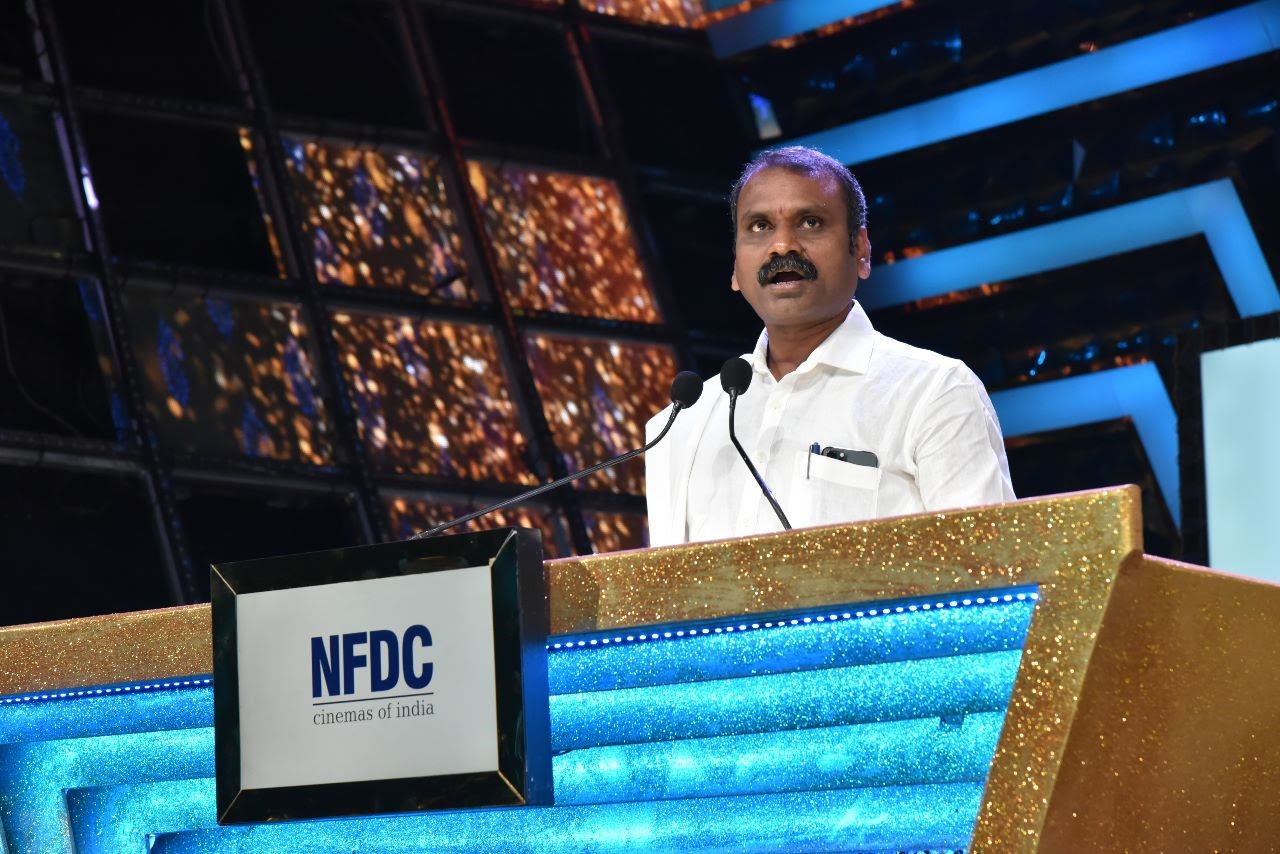 To make the festival more inclusive and accessible for everyone, special provisions have been made for Divyangjan Screenings (for the specially-abled), Thakur said. “Keeping in mind their accessibility needs, the films in this section will be audio-visual-equipped, with embedded audio descriptions and subtitles. The Film & Television Institute of India (FTII) will be taking two special courses for the specially-abled on ‘Smartphone Film Making’ curated for autistic individuals and a basic course in ‘Screen Acting’ curated for wheelchair users,” he informed.

IFFI erasing boundaries in the world of art and film

Union Minister of State for Information & Broadcasting Dr L Murugan said that post-Covid this 53rd edition of IFFI will be back to its vibrant festival avatar. “IFFI has been erasing boundaries in the world of art and film and allowing different film cultures to engage with each other and explore possibilities to collaborate. Our Prime Minister has described IFFI as the film festival which promotes synergy between delegates from different nations and societies, united by cinema. IFFI 53 has everything that a movie lover wants - 75 Creative Young Minds, Masterclasses, Box office flavour, Film Bazaar, and global cinema”, he added.

He said that I&B Minister is leading from the front to establish India as the content production hub of the world, through various initiatives such as incentives for co-production agreements, streamlining single window film facilitation, tapping huge AVGC (Animation, Visual Effects, Gaming and Comic) potential and marching ahead. The Minister also congratulated Spanish Director Carlos Saura for being selected for Satyajit Ray Lifetime Achievement Award. Dr L. Murugan also acknowledged the great contribution made by the State of Goa to the success of IFFI, under the Late Manohar Parrikar's leadership, and now under CM Pramod Sawant.

A new world-class multiplex & convention centre soon be in Goa 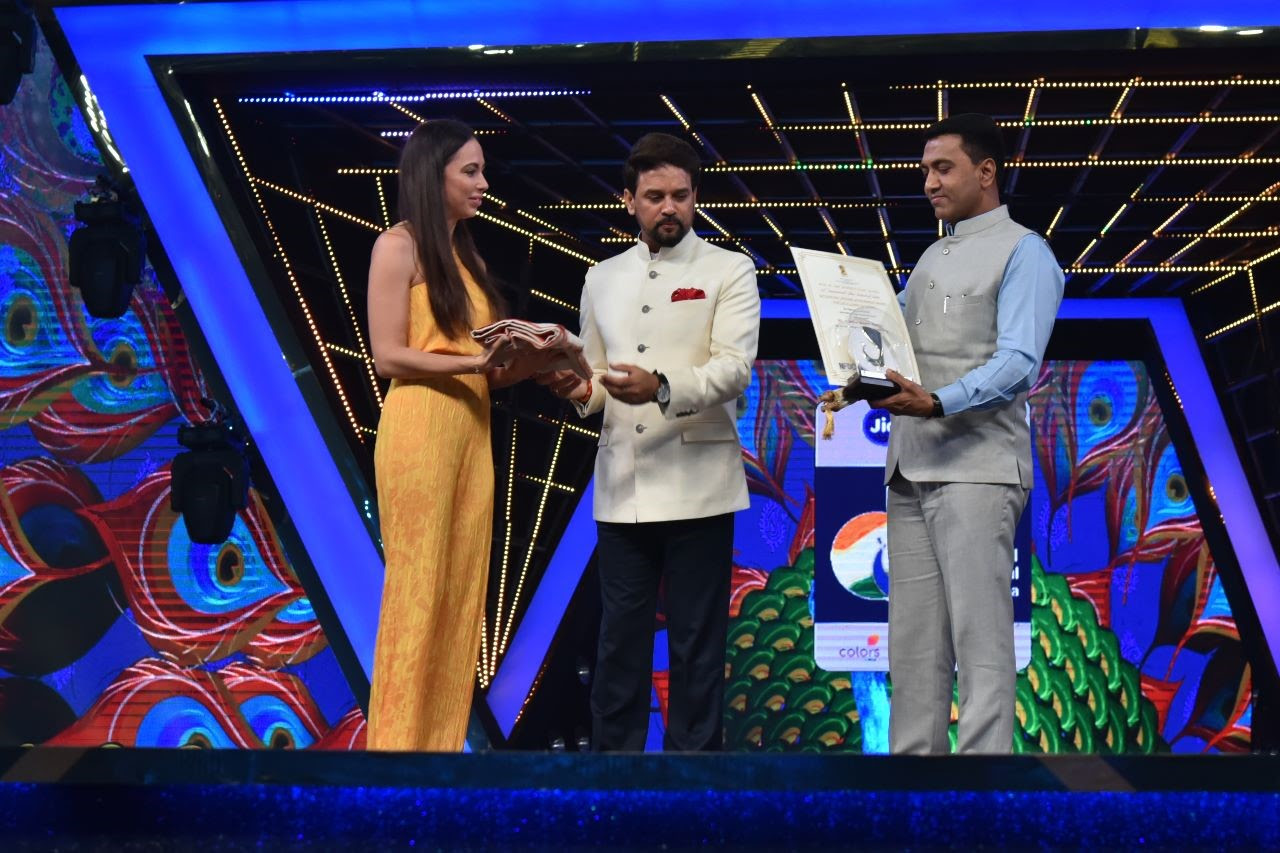 Addressing the enthralled audience at Dr Shyama Prasad Mukherjee Indoor Stadium, Goa Chief Minister Pramod Sawant said that setting up of a world-class multiplex & convention centre in Goa is at its final stage and hopefully we will be able to celebrate IFFI at the new venue by 2025. Mentioning the efforts to add a local flavour to the festival, Pramod Sawant said that this year at IFFI, the state government has taken an initiative to curate special masterclasses for the Goan film fraternity in which renowned film personalities from Hindi and Marathi film sections will participate. “A Goan section has also been specially curated for this year. A special jury comprising three jury members from Indian Panorama has selected six short films and one documentary film. We have been able to draw the attention of tourists and the Goan public through various peripheral activities such as festival mile, the entertainment zone and the heritage parade”, he said.  He also added that caravans will be deployed throughout Goa, and screenings will be held for the public. To make the event more inclusive special movie screening for Divyangs has also been made possible, Goa CM added. Pramod Sawant also remembered former Chief Minister Late Manohar Parrikar whose efforts made Goa the permanent venue for IFFI.

Welcoming the guests, Shri Apurva Chandra, Secretary, Ministry of I & B said that IFFI is a platform for the Indian film industry to showcase its best before the world and to invite the best practices in cinema from the rest of the world. The Secretary also read a special message from Prime Minister Narendra Modi. ‘’As the biggest film festival of India, IFFI promotes an invigorating synergy between delegates from different nations and societies, united by cinema,’’ read the message. I am a combination of extrovert and an introvert: Bhumika Chawla