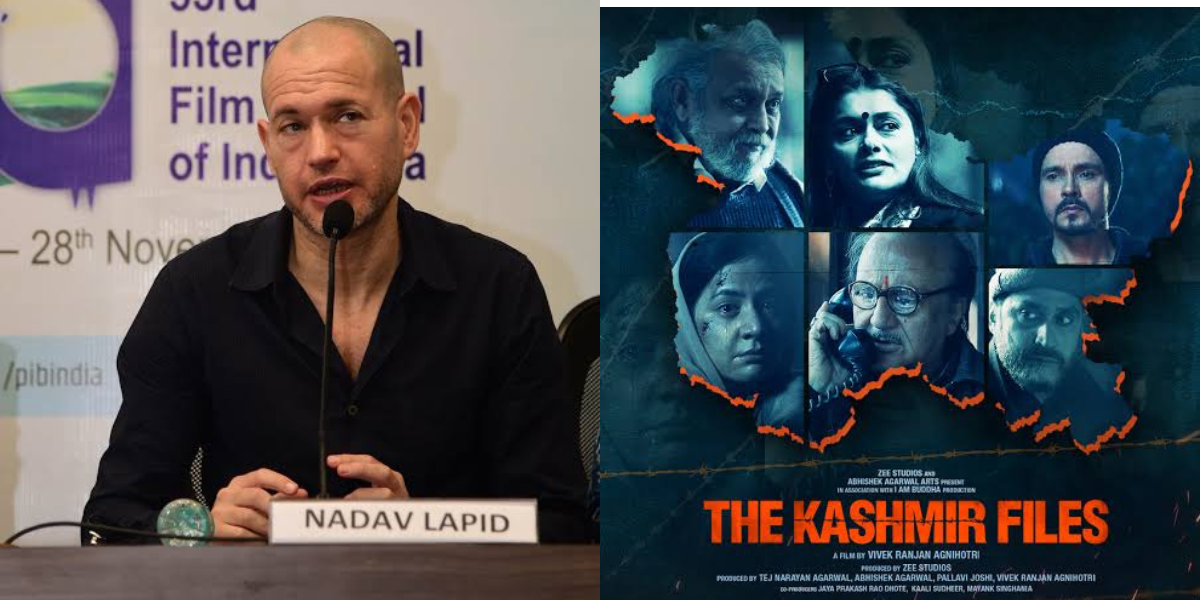 Mumbai (Maharashtra): The 53rd International Film Festival of India saw a series of films from all over the world get the recognized platform. IFFI not only helped being forward content made by unknown smaller filmmakers, but also gave them a way to promote their film to bigger entities. The festival recently concluded its last day on Monday, November 28. The closing ceremony saw many dignitaries give their concluding speeches, including Nadav Lapid who was the IFFI jury head. But a statement passed by him during his speech has been meeting with severe backlash online.
The Israeli screenwriter and filmmaker criticsed Vivek Agnihotri's 2022 film, The Kashmir Files, calling it "propaganda".
Lapid, in his address, said, "We were, all of us, disturbed and shocked by the 15th film: The Kashmir Files. That felt to us like propaganda, vulgar movie, inappropriate for an artistic competitive section of such a prestigious film festival. I feel totally comfortable to share openly these feelings here with you on stage. Since the spirit of having a festival is to accept also a critical discussion which is essential for art and for life."
This is not the first time that The Kashmir Files has been accused of being propagandist. The film, directed by Vivek Agnihotri was a successful hit in India and even went on to receive The National Award. It is based on the exodus killing of Kashmiri Pandits in the 1990 Kashmir.
However, Israel's Consul General to Mumbai Kobbi Shoshani had a different opinion than his countryman, Lapid. Shoshani took to Twitter to write, "I saw the Kashmir file and met the cast. I have a different opinion than Nadav Lapid. After his speech, I told Nadav my opinion."

Fellow jury member, Sudipto Sen reacted to Lapid's remarks and wrote a lengthy letter addressing the issue. He stated that the comments made by the jury head were solely his personal opinions and not the stand of the entire jury. "Whatever has been said by IFFI 2022 Jury Chairman Mr. Nadav Lapid about the film Kashmir Files, from the stage of closing ceremony of 53-rd IFFI was completely his personal opinion. In the official presentation of the Jury Board to the Festival Director and in the official Press Conference, where we 4 juries (the fifth jury had to leave for her personal emergency) were present and interacted with the press, we never mentioned anything about our likes or dislikes. Both were our official collective opinion. As juror, we are assigned to judge the technical, aesthetic quality and socio-cultural relevance of a film. We don't indulge in any kind of political comments on any film and if it is done, it is completely in personal capacity - nothing to do with the esteemed Jury Board," the letter said.
Vinod Ganatra, who is the chairman of the Jury Members of the Indian Panorama (Feature Films), also reacted to the matter. He said, "If the jury talks like this, then what about Schindler’s List? I strongly oppose and condemn this jury’s comment. I am also the chairman of the feature jury and I feel that it is insulting to India and for a film like this."
Further adding to his opinion, he stated, "The jury didn’t understand the spirit behind making this film. It is a highly-technically superb film. I, as a responsible filmmaker who has traveled for 96 jury assignments, a responsible filmmaker, and the only Indian who has won the Liv Ullmann Peace Prize, condemn this comment. If a jury feels like this, then it is insulting. It is a politically motivated comment. He can’t say that all the jury members felt like that. It is a matter of shame for all of us. I strongly feel that this is an insult to the country. He is an Israeli. What about Schindler's List which won Oscar? Because it is related to Israelis, they don’t have a problem."
Hindi film actor, Anupam Kher too has responded to Lapid's statement. Kher was one of the main leads of TKF and had actively participated in promoting the film and standing by its matter. He took to Twitter to post several images, including one still from the film that featured him. Along with it, he wrote a Hindi statement that loosely translates to, "No matter how big the lie is, it's always small in comparison to the truth (sic)."
He also gave his opinion to ANI and said, "If holocaust is right, the exodus of Kashmiri Pandits is right too. Seems pre-planned as immediately after that the toolkit gang became active. May God give him wisdom."