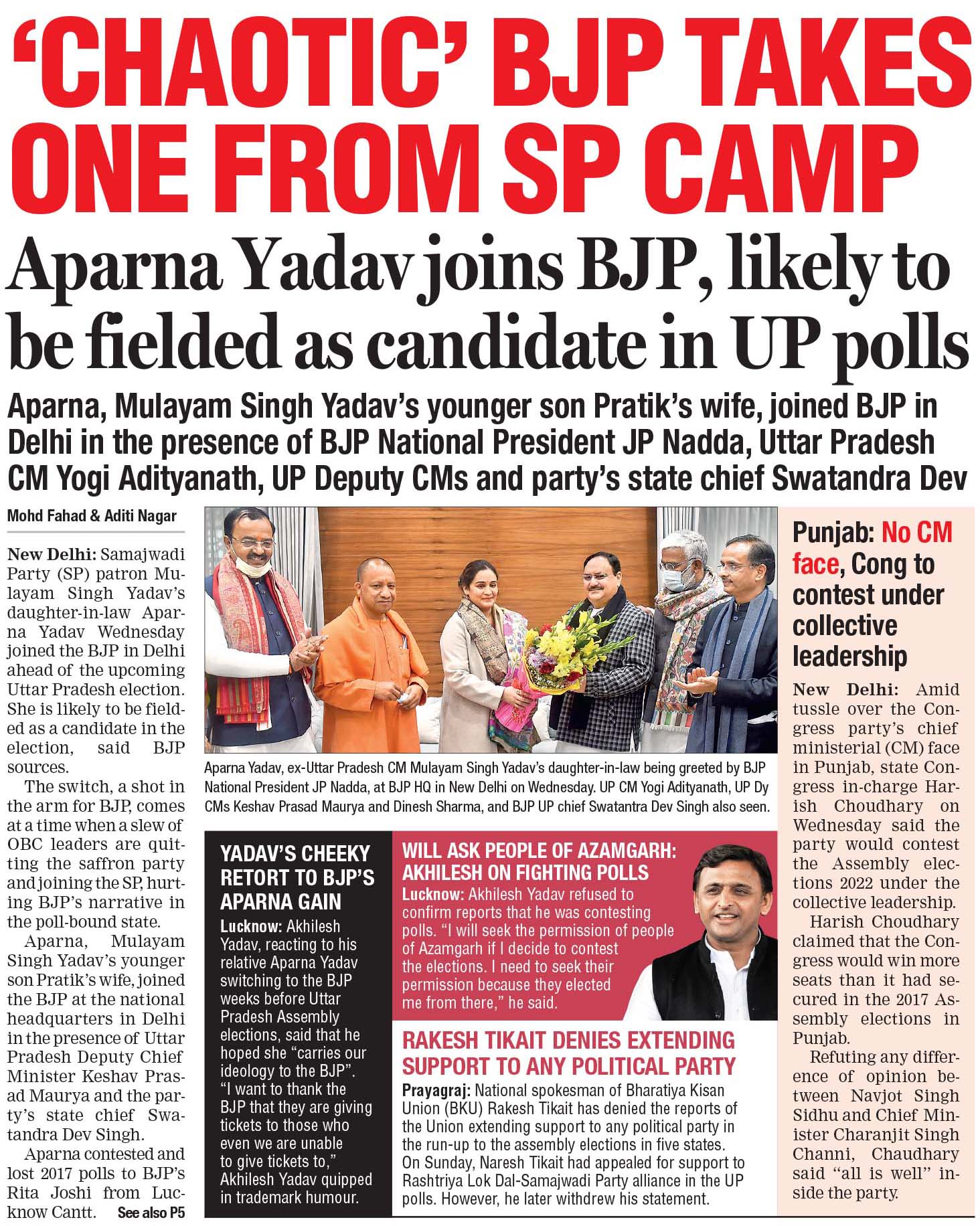 Aparna Yadav joins BJP, likely to be fielded as candidate in UP polls

New Delhi: Samajwadi Party (SP) patron Mulayam Singh Yadav’s daughter-in-law Aparna Yadav Wednesday joined the BJP in Delhi ahead of the upcoming Uttar Pradesh election. She is likely to be fielded as a candidate in the election, said BJP sources. The switch, a shot in the arm for BJP, comes at a time when a slew of OBC leaders are quitting the saffron party and joining the SP, hurting BJP’s narrative in the poll-bound state. Aparna, Mulayam Singh Yadav’s younger son Pratik’s wife, joined the BJP at the national headquarters in Delhi in the presence of Uttar Pradesh Deputy Chief Minister Keshav Prasad Maurya and the party’s state chief Swatandra Dev Singh. Aparna contested and lost 2017 polls to BJP’s Rita Joshi from Lucknow Cantt.

Punjab: No CM face, Cong to contest under collective leadership

New Delhi: Amid tussle over the Congress party’s chief ministerial (CM) face in Punjab, state Congress in-charge Harish Choudhary on Wednesday said the party would contest the Assembly elections 2022 under the collective leadership. Harish Choudhary claimed that the Congress would win more seats than it had secured in the 2017 Assembly elections in Punjab. Refuting any difference of opinion between Navjot Singh Sidhu and Chief Minister Charanjit Singh Channi, Chaudhary said “all is well” inside the party.

Lucknow: Akhilesh Yadav, reacting to his relative Aparna Yadav switching to the BJP weeks before Uttar Pradesh Assembly elections, said that he hoped she “carries our ideology to the BJP”. “I want to thank the BJP that they are giving tickets to those who even we are unable to give tickets to,” Akhilesh Yadav quipped in trademark humour.

WILL ASK PEOPLE OF AZAMGARH: AKHILESH ON FIGHTING POLLS

Lucknow: Akhilesh Yadav refused to confirm reports that he was contesting polls. “I will seek the permission of people of Azamgarh if I decide to contest the elections. I need to seek their permission because they elected me from there,” he said.

Prayagraj: National spokesman of Bharatiya Kisan Union (BKU) Rakesh Tikait has denied the reports of the Union extending support to any political party in the run-up to the assembly elections in five states. On Sunday, Naresh Tikait had appealed for support to Rashtriya Lok Dal-Samajwadi Party alliance in the UP polls. However, he later withdrew his statement.