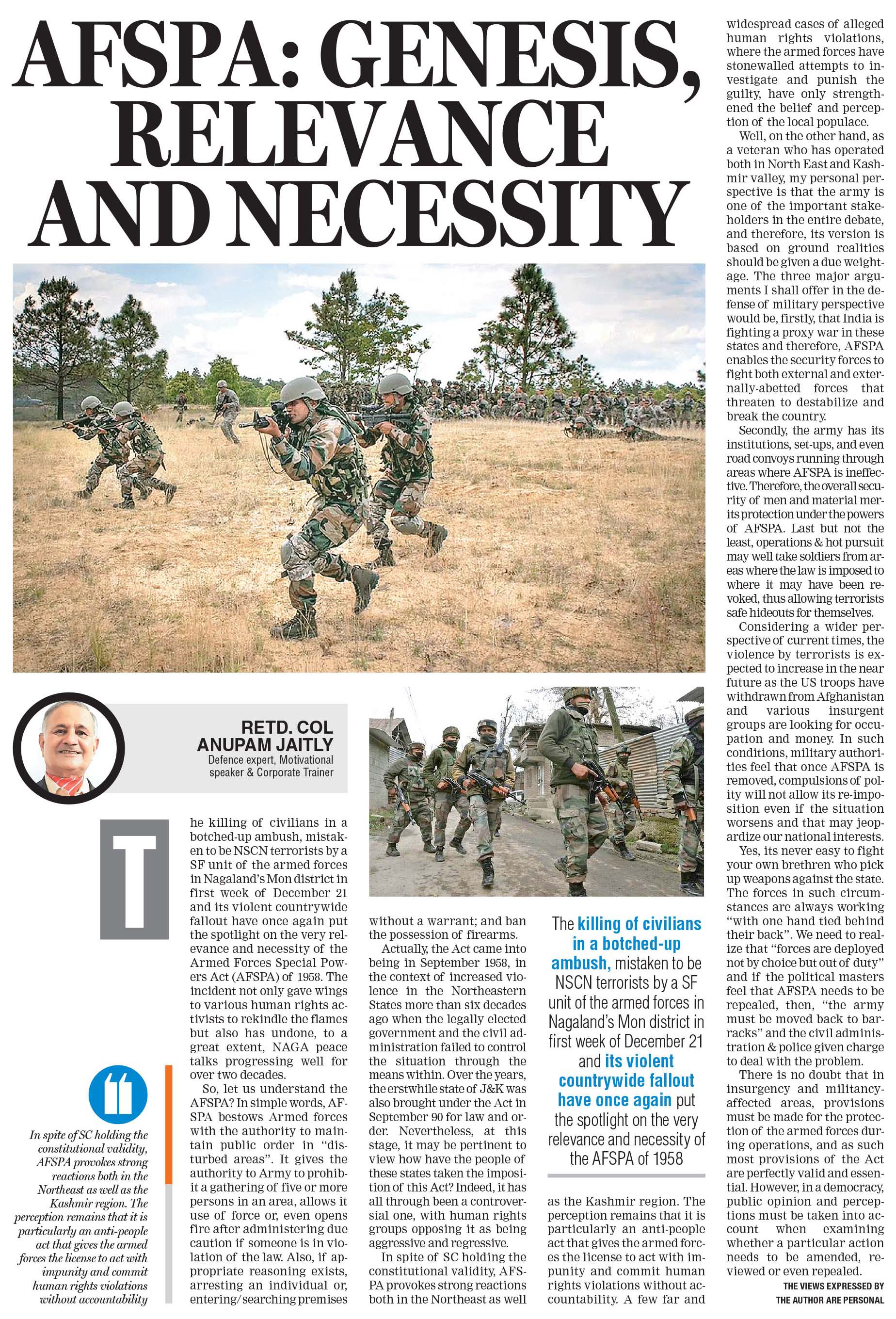 - The killing of civilians in a botched-up ambush, mistaken to be NSCN terrorists by a SF unit of the armed forces in Nagaland’s Mon district in first week of December 21 and its violent countrywide fallout have once again put the spotlight on the very relevance and necessity of the AFSPA of 1958

The killing of civilians in a botched-up ambush, mistaken to be NSCN terrorists by a SF unit of the armed forces in Nagaland’s Mon district in first week of December 21 and its violent countrywide fallout have once again put the spotlight on the very relevance and necessity of the Armed Forces Special Powers Act (AFSPA) of 1958. The incident not only gave wings to various human rights activists to rekindle the flames but also has undone, to a great extent, NAGA peace talks progressing well for over two decades. So, let us understand the AFSPA? In simple words, AFSPA bestows Armed forces with the authority to maintain public order in “disturbed areas”. It gives the authority to Army to prohibit a gathering of five or more persons in an area, allows it use of force or, even opens fire after administering due caution if someone is in violation of the law. Also, if appropriate reasoning exists, arresting an individual or, entering/searching premises without a warrant; and ban the possession of firearms. Actually, the Act came into being in September 1958, in the context of increased violence in the Northeastern States more than six decades ago when the legally elected government and the civil administration failed to control the situation through the means within. Over the years, the erstwhile state of J&K was also brought under the Act in September 90 for law and order. Nevertheless, at this stage, it may be pertinent to view how have the people of these states taken the imposition of this Act? Indeed, it has all through been a controversial one, with human rights groups opposing it as being aggressive and regressive. In spite of SC holding the constitutional validity, AFSPA provokes strong reactions both in the Northeast as well as the Kashmir region. The perception remains that it is particularly an anti-people act that gives the armed forces the license to act with impunity and commit human rights violations without accountability. A few far and widespread cases of alleged human rights violations, where the armed forces have stonewalled attempts to investigate and punish the guilty, have only strengthened the belief and perception of the local populace. Well, on the other hand, as a veteran who has operated both in North East and Kashmir valley, my personal perspective is that the army is one of the important stakeholders in the entire debate, and therefore, its version is based on ground realities should be given a due weightage. The three major arguments I shall offer in the defense of military perspective would be, firstly, that India is fighting a proxy war in these states and therefore, AFSPA enables the security forces to fight both external and externally-abetted forces that threaten to destabilize and break the country. Secondly, the army has its institutions, set-ups, and even road convoys running through areas where AFSPA is ineffective. Therefore, the overall security of men and material merits protection under the powers of AFSPA. Last but not the least, operations & hot pursuit may well take soldiers from areas where the law is imposed to where it may have been revoked, thus allowing terrorists safe hideouts for themselves. Considering a wider perspective of current times, the violence by terrorists is expected to increase in the near future as the US troops have withdrawn from Afghanistan and various insurgent groups are looking for occupation and money. In such conditions, military authorities feel that once AFSPA is removed, compulsions of polity will not allow its re-imposition even if the situation worsens and that may jeopardize our national interests. Yes, its never easy to fight your own brethren who pick up weapons against the state. The forces in such circumstances are always working “with one hand tied behind their back”. We need to realize that “forces are deployed not by choice but out of duty” and if the political masters feel that AFSPA needs to be repealed, then, “the army must be moved back to barracks” and the civil administration & police given charge to deal with the problem. There is no doubt that in insurgency and militancyaffected areas, provisions must be made for the protection of the armed forces during operations, and as such most provisions of the Act are perfectly valid and essential. However, in a democracy, public opinion and perceptions must be taken into account when examining whether a particular action needs to be amended, reviewed or even repealed.